Macvtap is a new device driver meant to simplify virtualized bridged networking. It replaces the combination of the tun/tap and bridge drivers with a single module based on the macvlan device driver. A macvtap endpoint is a character device that largely follows the tun/tap ioctl interface and can be used directly by kvm/qemu and other hypervisors that support the tun/tap interface. The endpoint extends an existing network interface, the lower device, and has its own mac address on the same ethernet segment. Typically, this is used to make both the guest and the host show up directly on the switch that the host is connected to.
VEPA, Bridge and private mode

Like macvlan, any macvtap device can be in one of three modes, defining the communication between macvtap endpoints on a single lower device:

Virtual Ethernet Port Aggregator (VEPA), the default mode: data from one endpoint to another endpoint on the same lower device gets sent down the lower device to external switch. If that switch supports the hairpin mode, the frames get sent back to the lower device and from there to the destination endpoint.

Most switches today do not support hairpin mode, so the two endpoints are not able to exchange ethernet frames, although they might still be able to communicate using an tcp/ip router. A linux host used as the adjacent bridge can be put into hairpin mode by writing to /sys/class/net/dev/brif/port/hairpin_mode. This mode is particularly interesting if you want to manage the virtual machine networking at the switch level. A switch that is aware of the VEPA guests can enforce filtering and bandwidth limits per MAC address without the Linux host knowing about it.

Bridge, connecting all endpoints directly to each other. Two endpoints that are both in bridge mode can exchange frames directly, without the round trip through the external bridge. This is the most useful mode for setups with classic switches, and when inter-guest communication is performance critical.

For completeness, a private mode exists that behaves like a VEPA mode endpoint in the absence of a hairpin aware switch. Even when the switch is in hairpin mode, a private endpoint can never communicate to any other endpoint on the same lowerdev.

A macvtap interface is created an configured using the ip link command from iproute2, in the same way as we configure macvlan or veth interfaces. 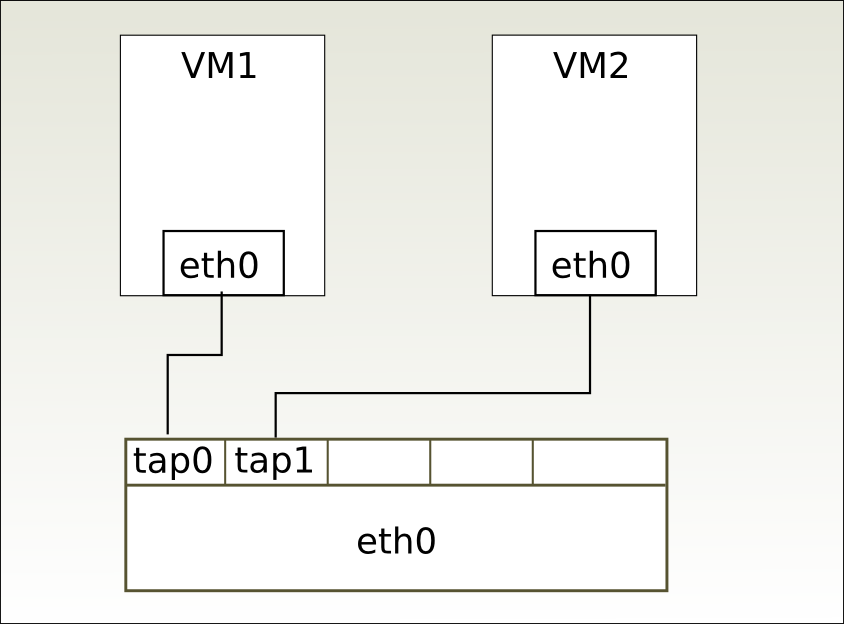